Bangkok from the Sublime to the Ridiculous

I’m not going to lie, Bangkok is not my favorite place. Granted, I have spent very little time there. I know people love it, but it’s not really for me. It’s a huge city with a lot going on all the time. The traffic is insane. Pollution is pretty bad. It makes Florida in the summer seem freezing cold. It does have incredible sights and smells. It is the superlative of many things in Thailand – biggest, most traffic, best schools, highest population, richest, etc. The underbelly of society is also alive and well, prostitution, sex shows, and bars full of ‘anything goes’.

My experience there is limited, but here are a few photos of my less than 3 days spent there with jet lag:

This was written before all the floods happened. My heart goes out to people who have suffered tremendous loss. Thai people are resilient. I am sure things will continue to improve.These pictures were taken in the beginning of September.

People ask if I have been affected by the flooding. I’ve been minimally inconvenienced – I’ve flown instead of taken a train, oh poor me. Nothing compared to some of the devastation that has wreaked havoc on others. On the upside I’ve had some lovely temporary students who were escaping up to Chiang Mai.

The Grand Palace from the Chao Praya River 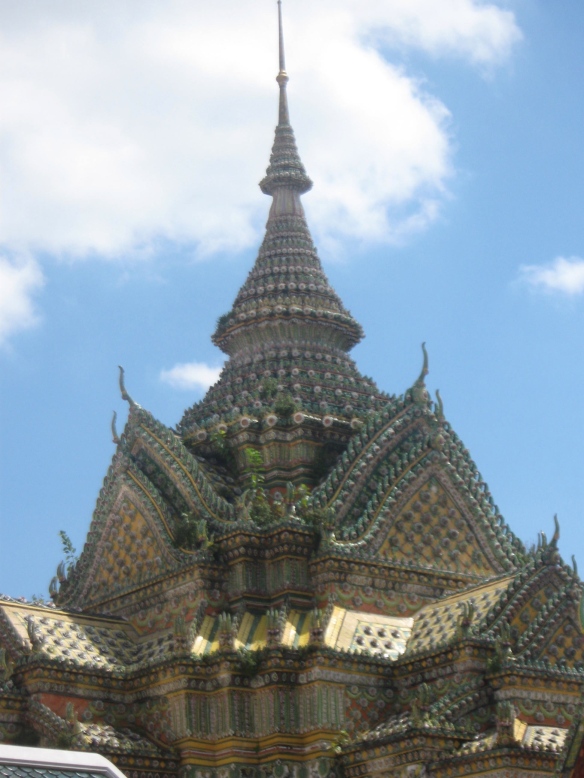 Wat PhoThe reclining Buddha at Wat PhoThe Reclining Buddha's footWat Pho roofA tuk tukMy standard breakfast - coffee, a fruit bowl with yogurtthe ubiquitous street food stallsWhy do these pictures get smaller each time? I do not know. It is not my intention.

I guess it's OK if you don't smoke alcohol

for my pal 80s style

The craziness near Khao San Rd

This shows a miniscule picture of Bangkok through my myopic lens. I have not made any claims that I know much about Bangkok, as I just spent a few jet lagged days there. Not enough time to say much. I tend to be overwhelmed and have the need to escape after about 48 hours. On to the next places where I may have spent a bit more time.

Glad to see this tree is still here and decorated

It was September 3rd just after midnight when I arrived in Bangkok. Was it an ideal landing time? No, it was not. After leaving on the morning of September 1st from Portland, Oregon and 3 planes later I was glad to finally be there matter what time it was. I was also extremely relieved to find an ATM in which my card worked – whew! I walked out in to the humid night and got a ride in a hot pink cab from the airport, where the attentive cab driver smiled and helped me with my bag. He asked my name and responded with, “Same same Queen Elizabeth”

I checked into my nicer guesthouse (see: flashpacker) in the Ko Sarn Road area. Some drunk American yahoos woke me up shortly after I had fallen asleep. They were loud enough to get chastised by even the most forgiving Thai people. I thought briefly, maybe I’m just too old for this, then I thought I’d see how I’d feel after sleep.

Thankfully I slept until 11:15 and was awakened by the roar of tuk tuks. I knew by looking at the map that I’d be staying  near New Siam Guesthouse, where I’d stayed 11 years before. I realized when I walked downstairs that it was just across the street. The good real coffee with a little pitcher of milk, and a bowl of tropical fruit with yogurt that I’d remembered was still the same. Now that I’d been properly fueled up, I was prepared to meet the chaos that awaited outside. 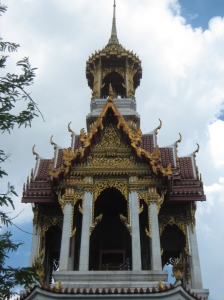 I found immediate refuge in the wat – The Buddhist temples that are everywhere in Thailand. I took my shoes off, lit some candles and incense, saw monks studying, and I prayed. I emerged in the Khao San Road chaos, but found lots of pretty things I love, and one stupid thing I need – a pair of ‘RayBans’. Do you think they’re real for $5?. I can’t believe I forgot to pack my sunglasses.

Not surprised to see this guy... 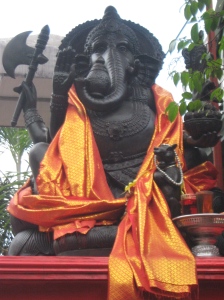 ...but a little surprised to see Ganesh, the hindu god, welcoming me to Buddhist Thailand

My second meal was Pad Thai on the street for 30 baht. Currently 30 baht = $1 USD. When I was here last time street Pad Thai was 20 baht, and the exchange was closer to 40 baht to a dollar. It’s twice as expensive now, but still cheap… and still good.

The heat is stifling so I head to the internet place for some air conditioning. I was offered many times to buy a suit or dress, get a massage, or to take a tuk tuk taxi. Off to the wat again. 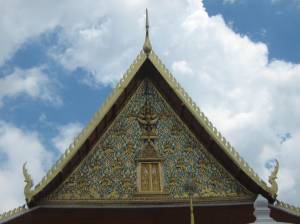 Back in my guesthouse, there is wifi, but it isn’t free, I had to buy a card. This allowed me a pleasant little exchange with Khun Ong, and my first attempt to practice Thai – it will not be an easy language.

Now it’s time for one of the things I have been so excited about Thai massage! For 200 baht an hour (yes, that’s about $6.50 USD) it’s lovely and relaxing.

I return to my room for a cool shower, then start wandering looking for dinner. I pass a few food carts, one is VW bus.

I stopped for a small bia Chang when a few drops of rain begin to fall. A plastic tarp goes up, which I think is in vain, then a literal monsoon takes place. I decide to move inside the VW bus where I was talking in attempted Thai to a guy named ‘Big’, who was wearing a shirt with the Dude from Big Lebowski. The monsoon did not cease. The plastic kept getting full and then dropping huge amounts of water on the street while taxis and cars were still going by. Had the rains been this bad before? I don’t think I was here for the rainy season.

People from the Basque country escaping the rain in Bangkok

Bad weather has a tendency to bring people together. There had been a couple under the tarp splitting a large bia Chang and the woman came to get another. Big asked where she was from and I, who usually am pretty good with accents couldn’t guess where she was from. Basque country de España, I’ve never met anyone from there outside of Spain. Her name was Ane, and her boyfriend was Igor. We ended up talking in Spanish, which was infinitely easier than me trying to talk in Thai.

Occasionally I did the Spanish translation to Thai. This ended up being a kind of hilarious problem. A él no le gusta ahaan phet. – In SpanThai this is what I said to the waiter who looked at me like huh? Then I tried with broken Thai English, “He no want ahaan phet.” That worked better. Ahaan aroi! – The food was delicious. Green curry for about $3 – proper restaurant, yum!

Starting young. This is about the age people start driving motorbikes in Thailand

you can search for posts by month…

…or peruse the 50 most recent posts by title. You can even type in topic to the search button on the top right corner.