Spices and Salwar Kameez in Alleppey

After a while in Varkala, Lex and I were ready to move on. One charming thing about India is the prevalence of train travel. We arrived at the station early enough to grab a bite here before traveling north to Alleppey.

It’s nice to know that almost everywhere in India, vegetarian food is close at hand.

This family was also awaiting the train

On the train headed to Alleppey…I think…

Ummm… we may have gotten on the wrong train. It was only temporarily wrong and we were able to switch at a station up the track. The wrong train didn’t stop us laughing. 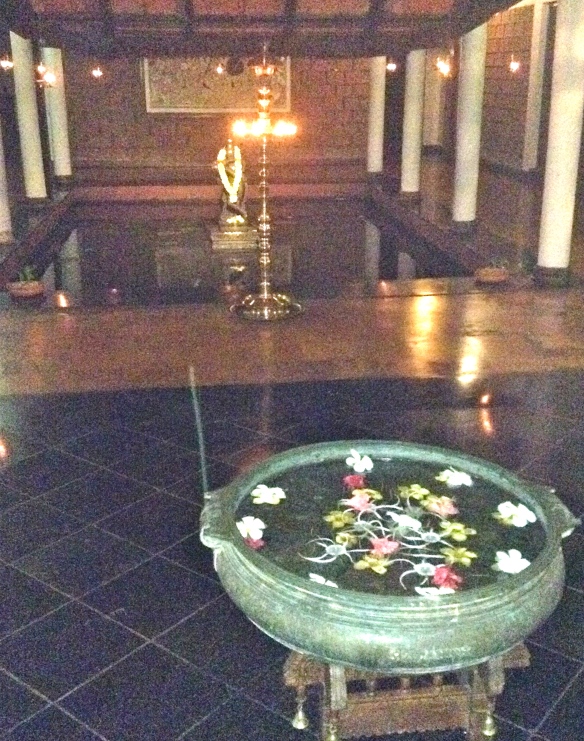 We did not exactly rough it with our accommodation Alleppey. We stayed at the Punnamada Resort

There were even flowers on the bed 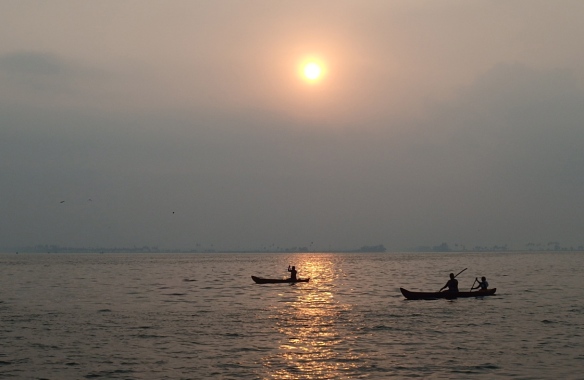 We stayed on the edge of the backwaters,  a picturesque spot for sunrise

One of the hundreds of houseboats

We watched two women fully clothed in saris jump into the water. At first I thought they were bathing, but soon it was obvious they were fishing for something. We observed as the women kept ducking under the water and coming up with something in their hands.

The door to our room at Punnamada resort

View from the breakfast table

After a leisurely morning, we borrowed bicycles from the hotel and rode into town.

Though there were many place to buy spices in Alleppey, this guy was just terrific at his job. 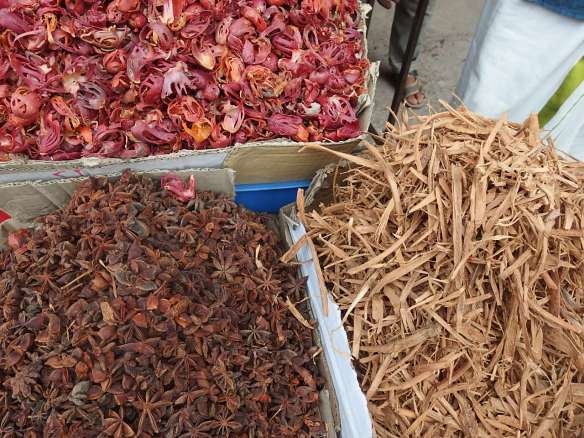 After loading up on spices, Lex wanted to get a Dhoti, which is Indian sarong for men. It ended up being a much longer shopping spree for me attempting to buy a Salwar Kameez.

Just an idea of how extremely crowded the store was

When the shop keeper knew I wanted a Salwar Kameez, he introduced me to Mini. She was rather mini, and a tremendous help. She made the whole experience enjoyable. 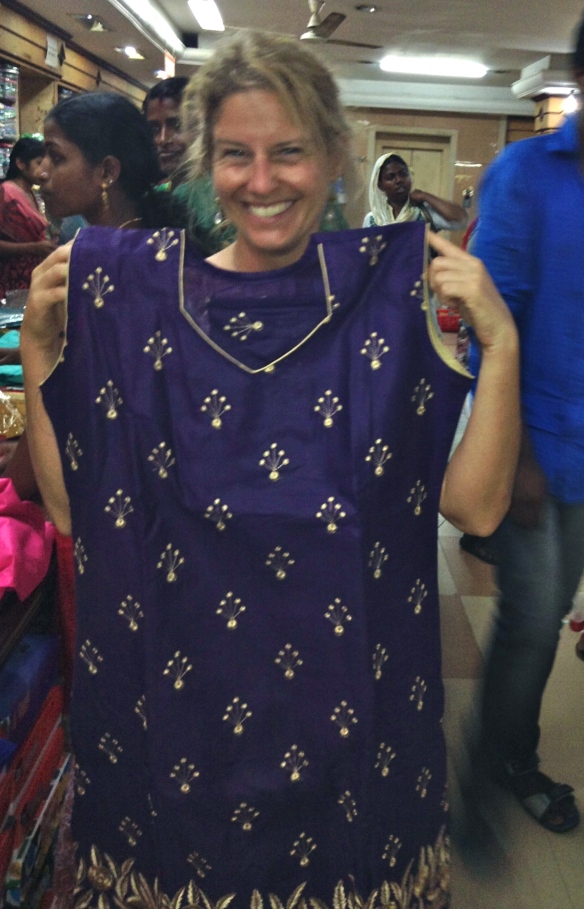 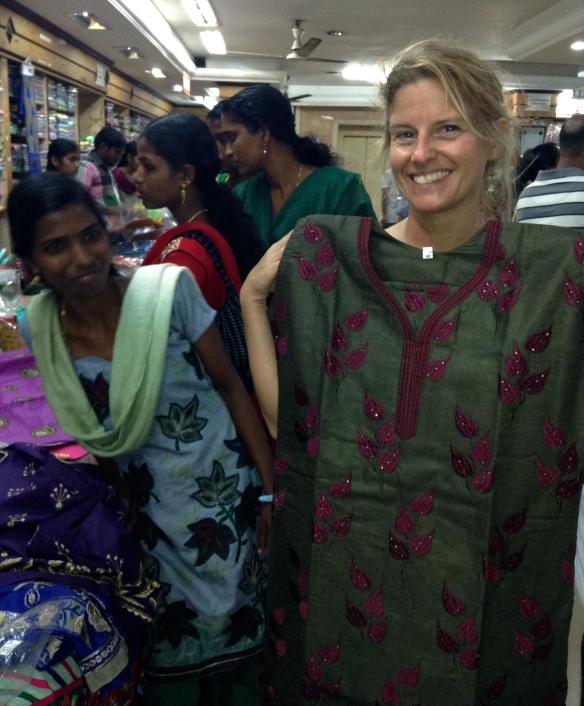 Mini told us this was the new style of Salwar Kameez. Sure enough, I did see plenty of Indian women wearing these who looked stunning. It made me look like a human bell. No.

Now I think that #3 looks the best. I bought #1, which needs to be tailored. Maybe I should take it to Climax Tailors and have some work done there.

Thankfully, Lex did end up getting a dhoti…

Nearing sunset, we cycled home from the traffic to quiet small lanes. Once in the out of the city and in towns, many people would shout hello, smile, and wave. Sometimes I felt like a celebrity. 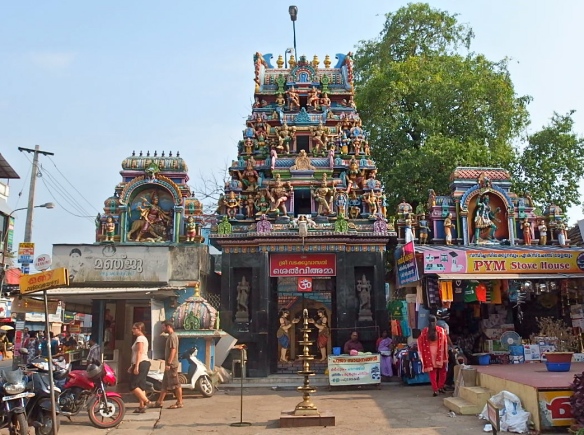 Hindu temple in Alleppey amongst the chaos 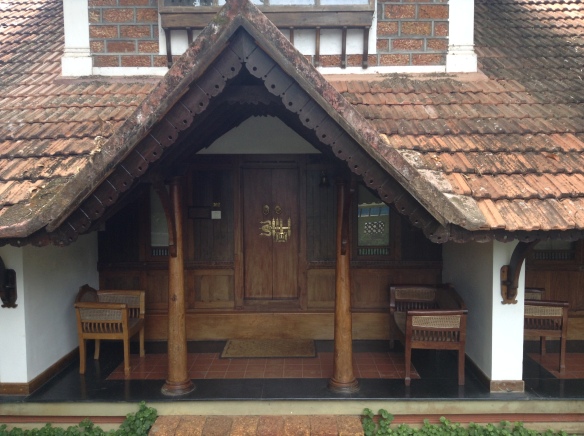 Post cycling in the heat, the pre-dinner swim felt fantastic.

My arm was feeling better. In the morning it was finally time for a yoga class. Ahhh. 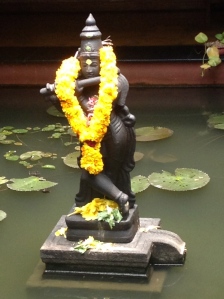 The reason we came to Alleppey, was to be out on the backwaters. Time to go on a houseboat.

5 thoughts on “Spices and Salwar Kameez in Alleppey”