It is my 1 year anniversary of living in Thailand. I am extremely lucky and grateful that I live here everyday. My life is good, and for the most part, I am happy.

I arrived here without a job, or place to live, knew very few words in Thai, and only knew one person in the whole country. A year has passed and I have a wonderful job, a lovely place to live, I know a bit more Thai, and have made several friends too. I still really love it here and Chiang Mai feels like home.

Today after work, Thai class, and running errands, it was close to 7 and dark out on my way home. I was driving through my neighborhood there was a motorbike coming toward me as well as a skittish looking cat. The cat got spooked and it jumped toward the grass and then toward my car. There was no bump or anything, but I didn’t see what happened to the cat. I turned around and my headlights shown on a small feline body on the road. Oh no!

I didn’t quite know what to do, but I knew I had to do something. I checked for a response from the cat and there was none. I tried to remain calm. Five dogs across the way were barking at me from behind a gate.  They kept barking so a person came out. I said, “Kor toad kha. Mew dtai.” The woman came out and I showed her to see if it was hers, she said she fed it. We established the cat was dead and I started crying. In my more than 20 years of driving, I’ve never hit any living thing (besides insects on the windscreen) ever.

The lady was amazingly kind and was more worried about me. She told me to not feel bad and, “Many cat get hit this road. Is part of life. The cat go on to a better life now.” Her husband came out with a box, and we put the cat inside and she took it away. She reassured me that accidents happen. I tried to stop crying, but felt really awful. I love animals and the last thing I want to do is harm them.

I drove home slowly, then called my teaching partner Kru Goy because I wanted to do something for the kind woman. She explained that Thai people would think it’s weird to give something to the person who fed the cat, as she already knew I was sorry. Thai people view death differently than Westerners – death is a part of life and you wish somebody to be born into a better next life. She suggested I meditate and pray for the cat to have a better next life. Stay calm. In the morning I could make an offering at temple and she agreed to meet me at a wat near our school.

The following morning we met at a beautiful wat. Goy talked to the monks. I made an offering of money in an envelope and Kru Goy wrote something in Thai on it. There were two glasses, one full of water and the other empty. Kru Goy said I should pour the water from one glass to the other as the young monk was saying his blessing. After he was done, I was to pour the water glass out on a tree. Kru Goy told me that the monk’s blessing said I didn’t mean to harm the animal and we wished it well.

I couldn’t believe it, but afterwards I genuinely felt better. It was as if a huge weight had been lifted. I felt forgiven.

Death is always a reminder that life is short. We best live in the present.

It’s Christmastime and even in this Buddhist country, that means the spirit of giving. This week before Christmas has presented me with several opportunities to be generous.

During the week with Panyaden School, we went to an orphanage in Chiang Mai to give toys and clothes donated by the students and teachers to the orphans. It was just a few students, one other teacher, the director, and me. The older kids (meaning up to 5 years old) weren’t there, so we played with babies. I thought it would make me extremely sad, and to a degree it did, but not nearly in the way I would have pictured. What hit me while there is that it seemed obvious that I will adopt a child, she doesn’t even have to be a baby. There are too many unwanted babies and children in the world. 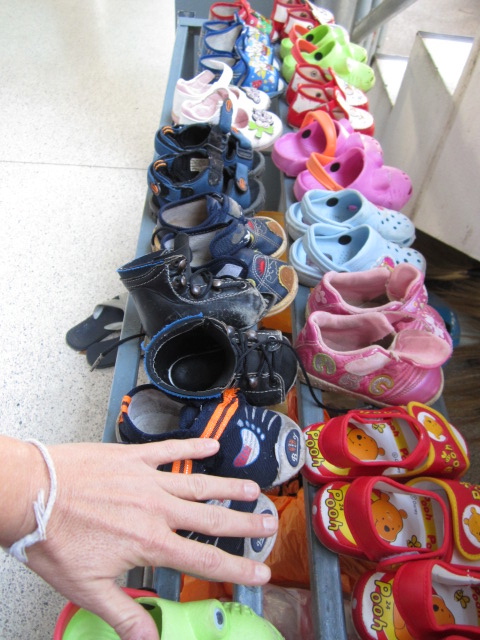 Shoes at the orphanage with my (rather small) hand for scale

Kru Goy and baby at the orphanage

Giving gifts to the orphans

I started thinking of all of my friends who have children. The little boys and girls must be getting excited for Christmas. I’m ready for a child, but I’d still really like the partner first. Being in that orphanage made me just want to take a child home with me. Will I adopt a child? I’d imagine I will. I am open to meeting someone who already has a child too. I’m very open to that in fact. I’m not actually sure if I’d be physically able to have children anyway – I probably can, but I’d need to start on that right away, and there isn’t any man in the area that strikes my fancy…yet. The most interesting man I met in 2011 is now far far away. Sigh. Perhaps soon I will meet someone even more interesting, and who is here and wants to stay here, and wants to get married (to me, obviously, and me with him), and wants children. And here’s to hoping!

Being true to the 12 wise habits at Panyaden, Caga – meaning generosity, we also gave alms to monks. I’d like do that more often. I really admire the Thai people who give food to monks every morning.

Never in a million years would have imagined that I would be sitting in a little bungalow overlooking a lake in Thailand, not married, with no children on Christmas Eve in 2011, but c’est la vie.

Since I had to give Sombra away, I thought I’d build up good dog karma by volunteering at an organization called Care for Dogs. It seemed like the right thing to do on Christmas Eve.

Some of the dogs at Care for Dogs

Arriving at Care for Dogs, there were so many dogs with so many needs, it was a little overwhelming. Quite a few of the dogs were in pretty rough shape and my heart went out to them. Others were a not as bad off, and others still were simply adorable. A multi-dog fight broke out minutes after I arrived and it scared me, but everyone ended up being fine. A kind woman named Irene took me around and showed me all that needed to be done…a lot. Her basic message was that every one of these dogs needs some love. I am considering the possibility of fostering a dog for a while. After the Sombra ordeal, I don’t think I’m quite ready to have a permanent dog for some time. The volunteering there, surprisingly, was more difficult than being at the orphanage.

Christmas wishes: I have sent loving kindness to my family, and friends, with and without children. It’s important to live in the right way, and I actively try to do that each day. I have been living a very full life, and I am so extremely thankful for so much of what exists in my life, especially being here in this amazing country. I know I am one of the luckiest people around, and because of this I would like to share my life with a special man and to raise a child with him. God, I have been patient. I know you have your plan, but I thought I’d let you know that I am ready now. Thank you.

you can search for posts by month…

…or peruse the 50 most recent posts by title. You can even type in topic to the search button on the top right corner.